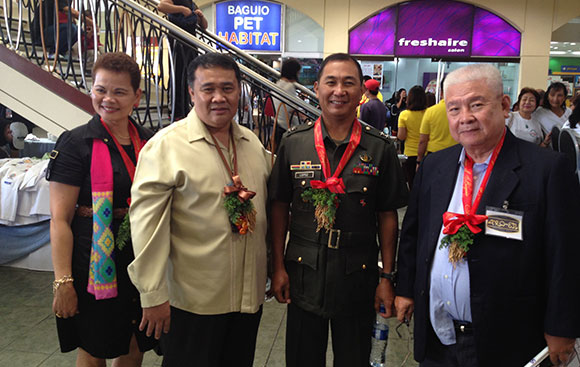 Sep 14-16, 2014 – Baguio City. The annual HRT week organized by Hotel and Restaurant Association of Baguio was held with Salinas as an exhibitor in Baguio Country Club Convention Center.

In the three day event, Aro-En Gourmet Salt was featured in a booth and during the cocktail dinner for sponsors. In one evening, the judges of the culinary competitions were introduced to the wide range of gourmet salt that sparked their interest and curiousity.

On its 2nd year as part of the opening ceremony called Rice and Shine, all participating schools, sponsors and establishments were gathered on the activity center of SM Baguio. As a sign of unity, HRAB members each prepared fried rice that were placed in a gigantic aluminum plate and served to more than 2,000 visitors and attendees. Baguio Country Club’s Executive Chef Kiko Tugnao used two particular Aro-En Gourmet Salt on his Lechon Kawali Fried Rice. Those who had a chance to taste this experienced the juicy meat flavor accentuated by Sel Gris with rice that was mildlly seasoned by Fleur de Sel.

July 25-26, 2014 – Salinas Foods Inc in partnership with Tangerine Kitchen and International Culinary Arts Academy of Cebu (ICAAC) participated in Cebu Goes Culinary. Held in SM Cebu Trade Hall, it was an event organized by Hotel Resort and Restaurant Association of Cebu. There were several exhibitors present and among them was the booth…

No comments to show.